We were recently approached by a friend who told us about a dead harbor seal pup on Appledore Island. We used our training to collect data on the individual and report to Marine Mammals of Maine. This is just one of the few unique experiences we have had as Shoals Marine Mammal Undergraduate Researchers this summer.

In other news, we have reached the end of our internship, and with that, the end of our seal research. It has been wonderful spending 10 weeks at Shoals Marine Laboratory, and having the amazing opportunity to conduct boat surveys at Duck Island. Through this experience, we have learned how to better conduct research, how to operate a large camera, and some of what behavioral research entails. We depart with a better understanding of marine mammal biology, their conservation and management. Most importantly, we depart with amazing memories of working with the scientific community at Shoals.

Can you identify these seals hauled out below?

We have continued to conduct our seal surveys to monitor the grey and harbor seal population on Duck Island and it’s surrounding ledges. However, through the years since this program has started seal surveys on Duck Island, the meta data can be used for more research and analyses apart from just population growth/changes over time. Working with long term data allows us to make inferences and analyses that would not be possible with only short term or seasonal data. Hence, it is important that we continue to promote and carry out long term monitoring of the seal population found on Duck Island.

Throughout this season, the both of us have also been using the gathered meta data to try to try to answer other questions that could have important management and conservation implications. The two projects that we are currently working on are:

Both of these projects deal with examining how various abiotic factors influence behavioral patterns in these two seal species, specifically at the haul out location: Duck Island + surrounding ledges, which has never been studied before.

Stay tuned for more updates on what we are able to find out! 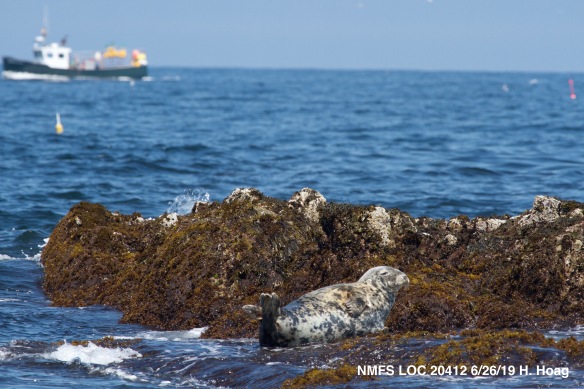 This week, we are avoiding conducting surveys between the dates of 7/4 and 7/7. This is due to the amount of boat traffic that Fourth of July festivities bring to the Isles of Shoals. It has been observed this year, and in past years, that boats approaching the gray and harbor seal haul-outs too closely will cause them to flush (leave their haul out spot and returned to the water). Avoiding surveys on these dates prevents our data for the season becoming skewed towards lower-than-typical numbers because of this boat traffic.

In other news, we are continuing to see (and report) entanglements. We unfortunately saw four new entanglements on our survey from July 1st. On a brighter note, we had our largest haul-out count of the season from the same survey! This was interesting considering that on the prior survey from June 29th, we had our lowest count of the season with only 20 seals!

Until next time,
Holly & Eye

A gray seal with a constricting neck wrap. 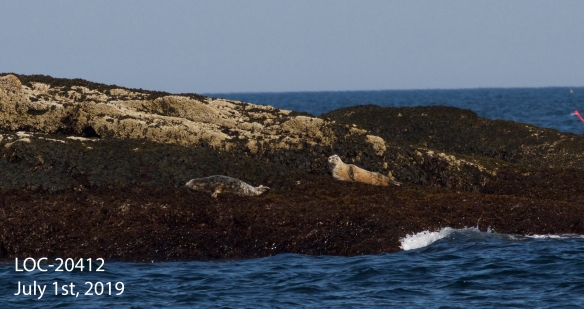 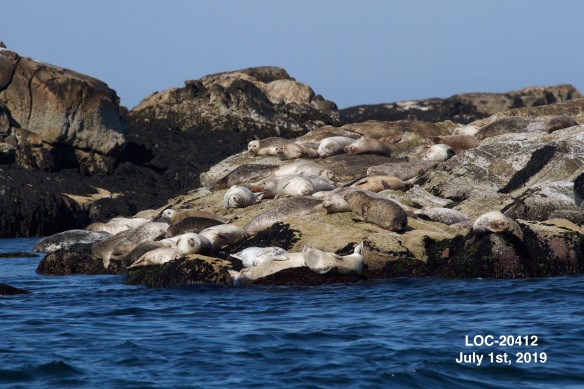 A large harbor seal haul-out (with one gray seal on the far left!)

Everyday when we aren’t out on a survey become days when we anxiously wait to go out on the next one. As we now approach the end of our fourth week here on Appledore, we have both grown to love going out on seal surveys to see and monitor the grey and harbor seals; however, this past week we have noticed a sharp decline in haul out numbers.

Sometimes haul out abundance can be vastly affected by anthropogenic activities, such as lobster fishing, recreational fishing, scuba diving excursions, or seal tourism. This past week, during our surveys we have been able to witness recreational boats around seal haul out areas on Duck Island and ledges that cause numerous seals to flush (return to the water). Abiotic factors, too can affect haul out abundance, for example, temperature, tide times, wind, time of day etc..

Because there are many factors that can influence seal haul out behavior, we don’t know for certain what exactly contributes to the decline in haul out counts that we have observed. As for now we will continue to keep an eye out, and hopefully, by continuing to  gather important ecological data we might one day find out why!

Science is not just about being outdoors collecting data and conducting field work. Often, people forget that most of science is done indoors. It might not be the most exciting thing, but indoor science is just as important as outdoor. Let us explain why…

After having gone a few surveys, this rainy week on Appledore, we bunkered down in the chilly undergraduate researcher den to sort, analyze, and process our own data and past data. We learned the importance of data management. Entering a few numbers into a database may seem trivial, but individual numbers collected over years can reveal trends and patterns that allow researchers to learn more about the population as a whole. This allows for conservation of the species if need be, or other forms of management.

On a brighter note, we do have some exciting photos from the field to show you! 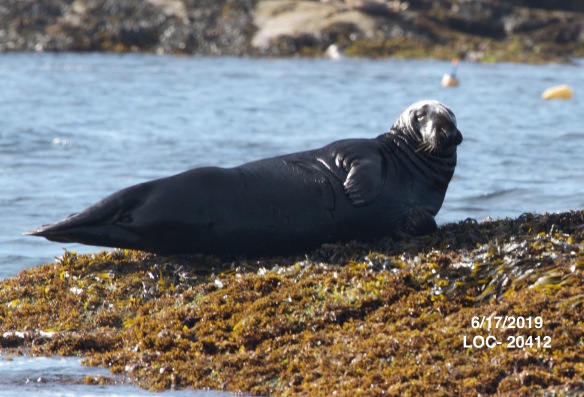 This is a beautiful photo of a grey seal from our most recent survey. Unfortunately, we were unable to identify the individual because there were no distinctive markings.

Here is a “rusty headed” harbor seal. An interesting phenomenon that has been observed on a few occasions. It is suspected that this coloration resulted from iron oxide in the water column that binds to the hair. But, this is not certain.

Until next time, kids…

We have performed 3 surveys so far and are already, sadly, astounded by the number of seal entanglements. The entangled individuals that we have spotted had impressions that were indicative of neck entanglements.  Picture below is an entangled grey seal that was resighted on two different ledges on separate days.

Appledore island has been beautiful and exciting so far, and we look forward to the next 8 weeks here. Stay tuned for more seal news! 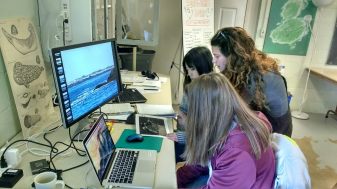 With a bittersweet heart, we will be saying goodbye to Appledore soon. Today, we successfully completed our research symposium. This years interns presented lots of amazing data and science, and we are all sad to be wrapping up.

We have also had a media crew come out from Portland, ME to film a short piece on our work here at Appledore.

We have had an amazing time while we have been here, and we are so thankful to be a part of this project. We will leave our seals for now, and look forward to the next continuing years of the project.

Thank you for sticking with us this season, and goodbye!

As August continues on, we have finally reached the end of our field season. Sadly, we had our last survey today! We were sad to wave goodbye to our beloved seals, but we’re not quite done on Appledore- and we aren’t saying good bye for good just yet!

We are still just as busy here wrapping up our survey data and independent projects in time for the symposium at Shoals this Saturday.

Although-we still had more interesting finds from our last surveys!

One is that there is definitely a shark in the area-we found shark wounds on a few of our seals!

This is a really interesting find for us-and shows that when there are healthy populations the natural predator/prey cycle continues.

We only saw four cases this year of bulging eye which remains a mystery.

Another thing we often notice are seals being flushed by recreational people and boats going too close to seal haulouts. It is important to know that the public is required under the Marine Mammal Protection Act of 1972 to stay 150 ft away from any marine mammal at all times. Going too close, and in the cases we’ve seen flushing the seals, is very stressful for the animal, and also detrimental for public safety. We work under permit to get our data, and we are very careful about respecting the boundaries of these animals and our permits.

Before we go, here is a lovely photo a seal in the water. 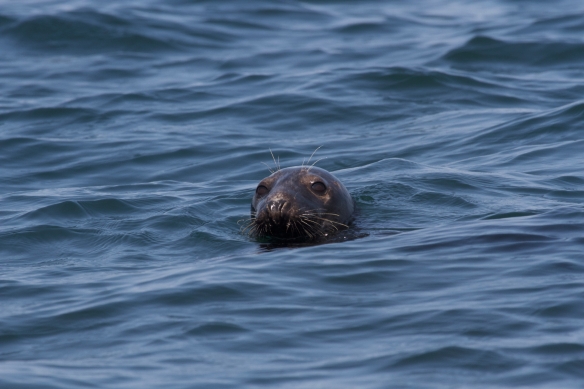 It has been a busy few weeks for Seal Team! As we find down here on Appledore, things have been as busy and vibrant as ever. The seals have also been busy, showing off their patterns, letting us take a look (from afar of course) at their injuries, and vocalizing across the water. We have just completed our 26th survey of the season, and we still have a few while we are here.

We have come across a few interesting notes lately, such as this seal with a red tag on the flipper! Tagged seals are seals that have either been rehabilitated and were tagged to rack their progress after release, or by programs in the U.S and Canada to tack the movements of some seals. While we cannot read the number, the red color may indicate who tagged this seal-our lead is the New England Aquarium in the early 2000’s. If you ever see a tagged animal, you can go the Marine Animal Identification Network, run by Woods Hole Oceanographic Institute, to report the sighting, and see where that seal may have come from!

We also have had many resights of seals identified from previous years lately. This will give us an idea of how many individuals are returning year after year, and if they still choose the same areas to rest on. Some of our resights are:

Motherhen, who has been sighted three times this year and many times throughout the years!

It is interesting to see who comes back year to year, and where they like to stay. This area is a special place, since many seals from Canada and the U.S come by here to rest and pup.

Seal Team 8 has been hard at work here at Shoals. We have just completed our 17th survey and have been seeing all sort of things out on the water. Sadly, our list of injuries and entanglements keep growing, but so do our counts as well as notes for pups and absolutely adorable photos.

We have now taken out two more boats-the Kingsbury and the Miss Christine for seal surveys- and both were a blast!

We also spotted out first branded seal of the seal! As Canada is the only country who uses brands to tag their seals, we know that this seal came from Canada.

We also have a new “highest” population estimate. On July 9th we counted 754 seals! There were 331 harbor seals, 423 gray seals, and 9 harbor seal pups.

We can’t believe we have been here for six weeks already-we only have another four weeks left on Appledore. Time seems to be going by fast but we have been making the best of every moment.

Places to go, birds to see, randomness on the way